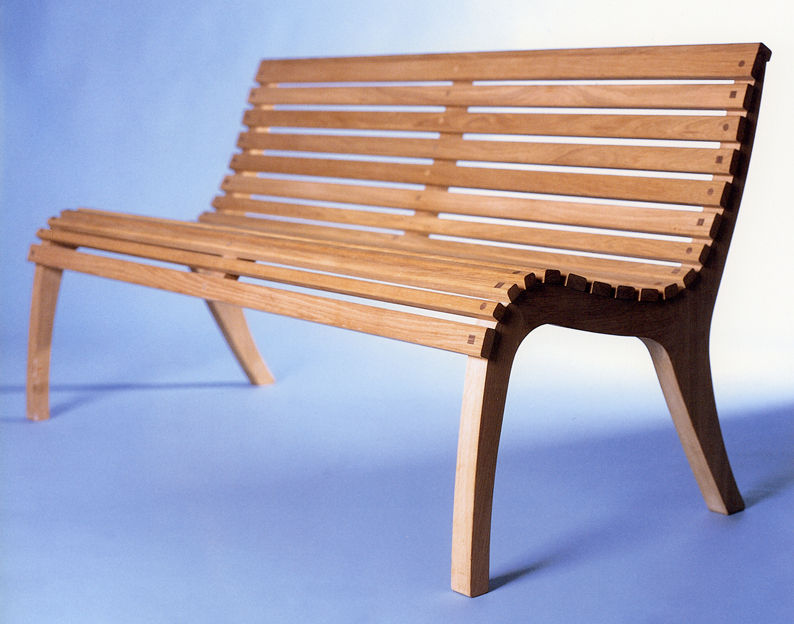 In 2001 I designed a range of furniture for the London company Trombé, including an oak bench. The bench was intended for garden or conservatory use, and was inspired by the comfortable, flowing lines of the metal roadside benches that you find everywhere in France. Most of our English benches are upright and uncomfortable; I wanted very much to make this a bench for relaxing on. The slats, of various widths to suit the curve of the frame, are fixed by what became the bench's most distinctive feature: alternating square and round walnut inlays giving a decorative concealment to the stainless steel fixing screws. The first benches were made by cabinet-makers Jeremy Higson, of Evesham, Worcestershire.

After exhibiting at 100%Design in 2001 the bench was selected by the Conran Shop for inclusion in their garden furniture range. Conran also commissioned me to design a matching table and low bench set. They were keen to use a Swedish manufacturer which led me to make a series of fascinating trips to the Småland area, where a great many furniture factories are gathered around the town of Jönköping. The Conran range was made by Sjöbergs, (pronounced 'hwer berry') who, since 1932, have been famous for the manufacture of their outstanding woodworkers' benches.

In 2002 the Trombé bench was shortlisted for the Homes and Gardens / V&A Classic Design Awards, and at a 'glittering' (I think is the right word) event at the V&A was selected by Prince Charles for the award of The Prince's Medal. 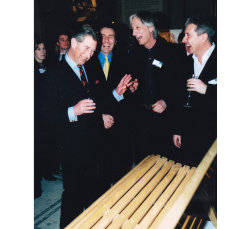 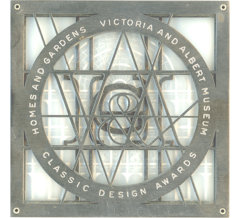 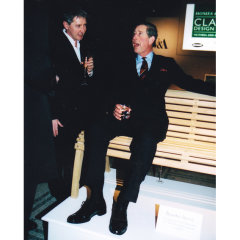 In his speech Prince Charles said The friendly, organic design of Chris Eckersley's bench makes it comfortable to linger on, whilst its proportions flatter and complement those who sit upon it.
The V&A said In the spirit of Prince Albert's award of medals to favoured British designers and manufacturers whose designs for the Great Exhibition came to form part of the Victoria and Albert Museum collection, the Prince's Medal for Classic Design is for an item selected from the shortlist by HRH The Prince of Wales.
The medal is designed by Wendy Ramshaw.


That was in 2002 and the bench has since been in continuous production. After Sjöbergs it was made in component form by Möbel Bigg (also in Sweden) and then assembled over here - this proved to be a good way of doing things. Subsequently I've made a rocking version (Rockin' Bench), and also a colourful perforated metal version on the same wooden frame (French Bench) as a sort of homage to the benches in France which started me off on the project. And there's also an outdoor table and bench set, which is available in colours to harmonise or contrast with garden planting schemes.

For the 2021 season everything has come full circle and the bench is again being made by Higson's in Worcestershire, the highly skilled team of craftsmen that made the original prototypes twenty years ago. 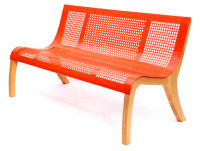