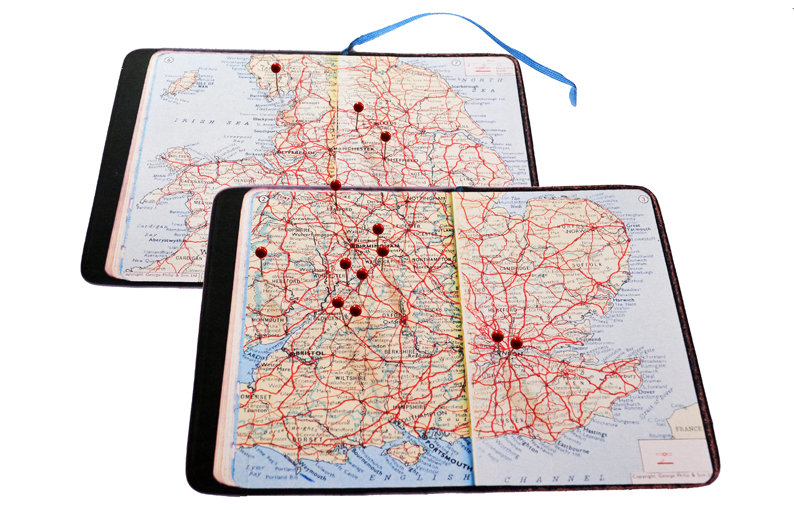 In 2014 I was invited by New Brewery Arts - a craft centre in the Cotswolds - to curate an exhibition on a theme of my choosing. Tired of the idea of craft as - in the words of Norman Potter - 'the middle-classing of working class trade practice into soft-option investment packages, or arted-up objects strictly surplus to ordinary requirements' (Models and Constructs, 1990) I decided to look into what I began to see as 'real' craft. So I spent the summer visiting workshops and factories (the pins in the map mark the locations) where - to me - something more authentic was going on.

Below is my introductory essay.

The idea of things being 'crafted' has rarely been as popular as it is today. Whereas in the 1990s the marketing buzz-word applied to almost everything was 'designer', in the 2010s it's 'craft' that sells.

The idea for 'real craft' came into focus following a conversation I had with two designer-maker friends while visiting the exhibition COLLECT. 'This is all very well,' I said, looking at the glittering array, 'but it's not real craft!' There followed a lively discussion on what is, or is not, or what might be real craft. This exhibition is an illustration of the point I was trying to make.

The publication of A Potter's Book by Bernard Leach in 1940 was a deciding moment in the evolution of ideas about craft. In a few short sentences Leach told artisan-potters that they should regard themselves as potter-artists - a deliberate attempt to elevate the status of craft by placing it on a par with fine art. 'The work of the individual potter or potter-artist belongs to one aesthetic category, and the finished result of the operations of industrialised manufacture to another and quite different category,' Leach claimed, thus repositioning craft for the rest of the 20th century. I believe this is the worst thing that could have happened, because it significantly reduced the chances of any collaboration between studio craft and industrial production. The idea of what used to be called 'the applied arts' was replaced with a view of craft that is much more self-centred and far less interested in any social purpose. This is what has driven craft towards the luxury market on the one hand, and towards the heritage industry on the other.

It's a popular myth is that craft skill is dying out. But is this really so? Or is it just a marketing ploy that gives products a certain 'buy it now while you still can' appeal? How often do we see craftworkers portrayed as an endangered species, as (for instance) ‘the last surviving bone bobbin-maker’ (or some such personage) whose skill will soon die out forever if he/she is not nurtured and supported? This is craft served up with a big helping of nostalgia as the servant of the heritage industry. In fact craft-as-heritage is muddled-thinking because it focuses too strongly on the particular. Nothing actually proves that craft is dying out, all it shows is that (in the case of the bobbin-maker) there is no longer a demand for bone bobbins. Craft does not die out, it just reinvents itself. Look around you - craft shifts sideways into new areas, and in some cases it's never gone away.

Under the surface there are still high levels of craft skill practised in everyday making and manufacturing. If some of it goes unrecognised, the reason is usually due to the bad press given in some circles to machines as an aid to manufacture. The machine can easily be portrayed as inhuman (think Chaplin's film Modern Times), the enemy of hand production, whereas in reality the machine, as everyone knows, is just a useful tool. Anything made in a 'factory' as opposed to a 'workshop' cannot - in this mindset – be 'crafted'. Even a workshop can be suspect; the craft preference (since Bernard Leach) is for 'studio' production. Eventually many of these prejudices can be traced back to the adverse influence of William Morris and his followers.

Before Morris, Henry Cole and the Design Reform movement had been critical of the goods produced by British manufacturers. But Cole's crusade was against what he regarded as bad taste; he had no problem with the use of improved manufacturing processes. William Morris misunderstood Design Reform, blamed the machine for the decline in standards, and sought to return production methods to a pre-mechanised age. In News From Nowhere (Morris's 1890 utopian view of a post-mechanised future) one of the characters describes how 'no sacrifice seemed too great a price to pay for getting rid of the “manufacturing districts,” as they used to be called.' Although a devout Socialist, it is obvious that Morris's early Nimbyism was in fact quite reactionary. 'No factories in England's green and pleasant land' is the message. Easy to say if you're high up on the Victorian rich list.

Gordon Russell on the other hand is a much more interesting character. Growing up in the Cotswolds in the early 1900s, an area then heavily under the influence of the Arts & Crafts Movement, he set up a furniture workshop in the village of Broadway. But as early as the mid-1920s Russell recognised that hand and machine are complementary and installed bandsaws, planers, dimension saws and the like, in order to gear up for batch production. 'The most urgent job of all was to teach the machine manners,' Russell said later. In this sense Gordon Russell is a key figure; he's the direct link between the Arts & Crafts and the Modern Movements (becoming in 1947 the director of the Council of Industrial design) and he proved that real craftsmanship can coexist with mechanised practice.

These days Russell's idea of craft skill aided by labour-saving machinery is common in all sorts of specialised trades. This is part of what I would call 'real craft' : real in the sense that it occurs in the real everyday world, and not in a fine art studio, nor at a heritage site, nor as a hobby or pastime. It's something carried out by highly skilled yet unpretentious people in many fields. Sometimes their input is recognised, sometimes they are anonymous. They don't necessarily regard themselves as artists, but they have creativity, pride in their work, and a satisfying job.

Not all 'real craft' skills have needed to be mechanised. Carpenters, tailors, plasterers, forged-metal workers, musical instrument makers, and many others still operate in ways that would be recognisable centuries ago. In his book Mechanization Takes Command (1948) Siegfried Giedion talks about the transition in methods of making from the Gothic period to the mechanised era. 'A remarkable symbiosis occurs,' he points out. 'Handicraft lives side by side, or intermingled with, industrial production, for the Gothic roots did not perish altogether. A token of this was the obligation to pass through the traditional stages from apprentice to journeyman and master. Even the factory mechanic was trained in a similar way.' Over sixty years on this is still relevant.

This exhibition pulls together examples from a diverse group of craftsmen and women which illustrates an idea of 'real craft'. Some are well known in their own right; some are working behind the scenes in a bigger organisation. The common thread running through the work shown here is that everything is made with care, with love, and with a very high level of craft skill.

To accompany the exhibition at New Brewery Arts a 32-page printed catalogue is available from online printer Blurb.
Follow this link to preview or to buy:
www.blurb.co.uk/b/5594110-real-craft-exhibition-catalogue?redirect=true
Price : £7 plus postage