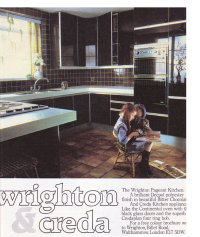 One of my first regular freelance design jobs in the early 1980s was with a company in Stratford-on-Avon who had a furniture, lighting, and interiors showroom. They wanted to increase their sales and so they took on an agency with Wrighton kitchens. I knew the people that ran the showroom and so I landed the job of measuring up and drawing their customers' plans. In those days 'Wrighton International' was THE quality British kitchen; they were nearly always specified by architects for any quality project, and they were the leaders in going over to the metric system - most British fitted furniture was then still planned and sold in feet and inches. I just loved Wrighton - they were modern, they were metric, and they were beautifully made.


Meanwhile I still had my workshop where I was designing and making bedroom furniture for Heal's, and after that a long series of bespoke pieces for Christopher Hyland, a furnishing company in New York. Any time left over was devoted to making and exhibiting sculpture. Later I met Alan Minchin who has a joinery company in the Cotswolds, and we started working together on fitted furniture projects, I doing the designing and Alan and his team doing the making and installation. This arrangement worked very well, and from time to time,when the right job comes along, we are still doing this 35 years later.
Here are two examples, both fitted kitchens (although I've been involved with fitted furniture for every room). The first is in a modern house, the second in a period property. 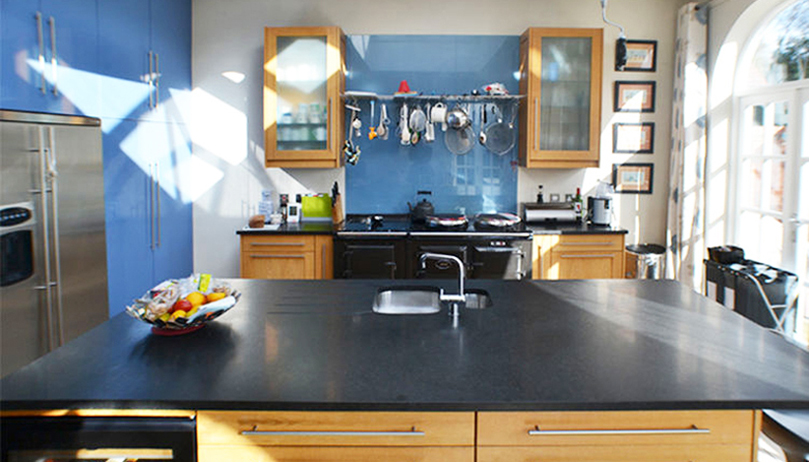 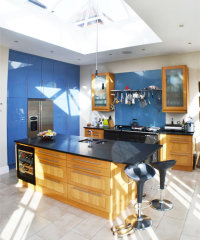 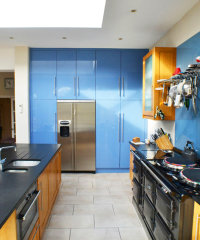 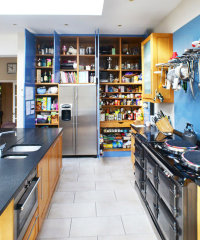 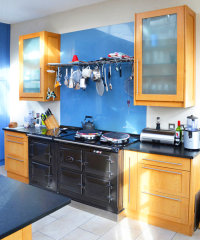 I spent my formative years studying for History of Architecture exams, while riding around on my bike making sketches of historic buildings and old churches. This might sound a bit dry but less so maybe when the definition of 'historic' includes 20th century developments in Modernism, Brutalism, and the International Style. All this has become a lifelong passion. Later, when I became involved in the design of furniture, and then fitted furniture, some of the most interesting jobs were in houses of architectural significance. For more than 20 years I regularly acted as draughtsman and visualiser for period house specialists Nigel Gilks Cabinetmakers - Making Plans for Nigel : hand-made drawings for hand-made furniture. In the '90s I was involved in many projects with (the late great) Robin Guild, a leading light in interior design, and more recently I've collaborated with historic buildings consultant Mark Van Oss. 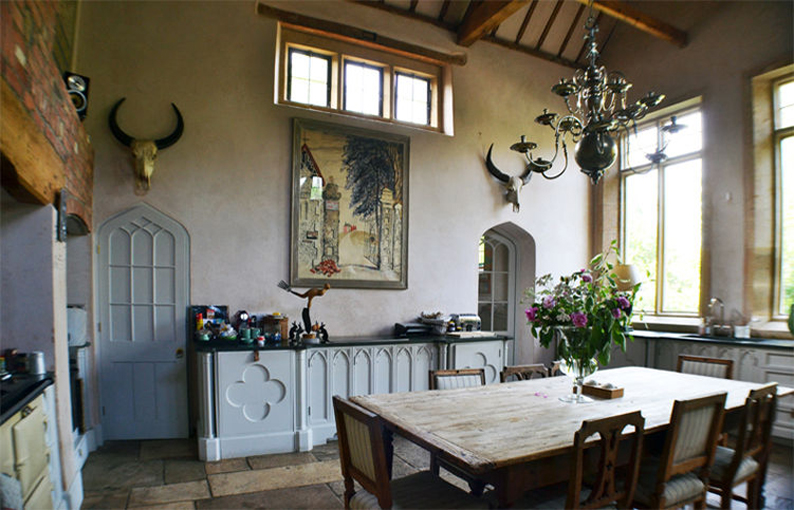 Here (above) is one of my favourite jobs - an old country house on the Gloucestershire/Oxfordshire border. It is described in Pevsner's guide:
'In 1750, and again between 1759 and 1762, much of the original house was pulled down and rebuilt on a larger scale by Sanderson Miller, who designed the exquisite SW front in his imaginative style of Gothick. The bays are panelled and decorated, and the windows have architraves with roll-mouldings and Gothick glazing. Polygonal ashlar buttresses, at the corners, crowned like medieval chimneys...'
I loved this project from start to finish; it became a close collaboraton with the clients. There was some talk about a very modern look for the kitchen, and no-one was really against this, but we kept coming back to the 18th century. The house is of that rare breed known as Gothic-with-a-K and so we looked at Strawberry Hill of course, and also at Lacock Abbey, but were trying to avoid a pastiche. Somehow in the end though, we were intoxicated by the Gothick - the clients had a really good feel for this - I'm sure it was the right decision as the kitchen looks like it fits with the house. Various modern appliances were unobtrusively built in, and two large deep Belfast sinks, which were already in the house, were re-used. I brought in specialist carvers and cabinetmakers who made the furniture, and some old pieces were given a new lease of life. A big old sofa and a vinyl record-player fitted into an alcove help create a cosy, welcoming feel. 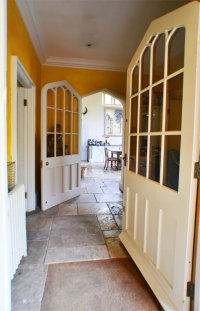 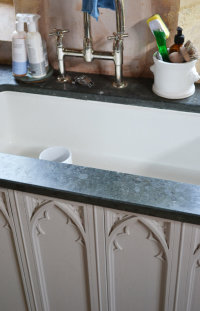 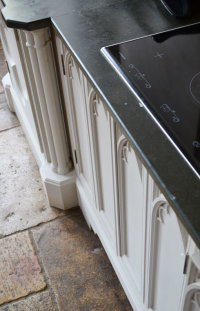 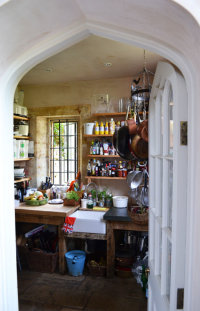