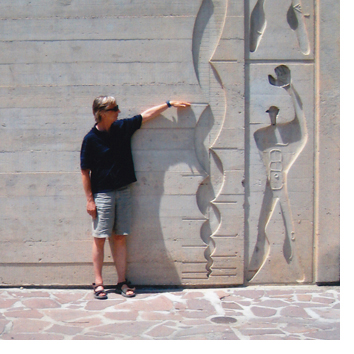 Originally I studied Sculpture and then on graduating set up a design-and-make furniture workshop. After a few years this grew like Topsy and I ended up with a dozen employees. We made one-off pieces, fitted furniture, and large architectural cabinets for a company in New York. In my spare time I made abstract sculpture.

Later I did an MA in Design Studies at Central Saint Martins, and was invited to become a Visiting Tutor there. I closed my workshop and began working as a freelance designer, which gave me time; time to spend on drawing, on research, and on making things speculatively, as well as taking on commissions from manufacturers and retailers.

For a few years, I had a studio in an old chapel in Deepest Herefordshire, where I discovered 'bodging' (or greenwood chair-making). This led to Bodging Milano which took on a life of its own and developed into many craft-based projects and fruitful collaborations with other designers.

Every place has its particular character and so I'm eternally grateful that I was born and brought up in Birmingham - the former city of a thousand trades and workshop of the world. The Brummie attitude very much used to be : 'OK, whatever you want, we'll make it' and this still lingers here to some extent, even today.
My father was in charge of the city's electricity supply and as a lad I was sometimes, as a huge treat, allowed to accompany him - always on a Saturday morning, as that day was more informal - on an inspection of some part of the town teeming with small factories, back-street workshops, sheds up alleys, or some other place where metal-bashing, jewellery, switchgear or gun-making was in progress; or maybe casting, cable-winding, die-stamping, drop-forging, or any number of other types of manufacture.
Therefore I think it must have been all this at an impressionable age which started me off on the idea of making things.